Whew. Month #2 is over and it came & went quickly. I feel like I had just started to get in the groove of things there, too.

March was a whirlwind of a month — but the kind of month I’ve gotten used to. It took me some years to find some comfort in constantly moving, but I’m getting there with that. ‘Going Mobile‘ I guess. And loving it.

I started March in Berkeley, stayed in San Francisco the few days after that, slept on couches at some best friends’ places in Los Angeles, spent a few days at my company’s office in Las Vegas, scurried to a bachelor party in Nashville, and ended the month in Chicago. I got back here (parents house in the Chicago suburbs) about a week and a half ago.

With all that moving, I had three (3) challenges to do my best to complete. As I did last month, here are the results of my challenges for the month of March.

Goal: One entry every day

I’ve been fascinated by the power of gratitude for many years now and wanted to make sure I was giving my proper thanks to things as I rambled through March and kept my lifestyle going. To track the entries, I used an app called Journey which allowed me to write on my phone or on my computer (Chrome App) and have everything sync.

Since I had the app on mobile, there’s really no excuse for not being able to write a simple post on gratitude. There are more than enough things to be grateful for each day.

The problem and my takeaway? My notifications did not work. I had the app notify me 2x per day and I had my google calendar do the same. I think that actually the fact that I had 4 notifications made it so easy to ignore. Instead of doing this once (and/or picking once per day), I was able to just ignore what came in (and my inbox was soon full of these) and think I’d catch it again next time around. Bad idea. Challenge lost, lesson learned.

For those interested, some of the people and things that made my daily gratitudes: Sanjiv Sinnaduray, Devon Perez, Jordan Zucker, Jesse Brosten, Alex Schwartz, Axel Mansoor, the ocean, free wi-fi at starbucks, Zirtual’s great las vegas pad, the health of my back and core exercising, the moon, Malcolm de Chazal’s musings, quiet evenings, folk music, cinnamon in coffee, applecare, and storytelling (and more).

Though the posts came near the end of the month, I had them in mind during the entire month. I was happy to complete this task — since it accomplished both my monthly goal and will help me explain what I’m doing with my year as well. The challenge itself grew out of this — my struggling to succinctly explain what I was doing by taking on monthly challenges and searching for a self-success framework.

That’s two straight months where I’ve successfully completed my writing goal. Might be on to something there.

I came near my goal here but ultimately did not find the time every day to make sure I got my L-sit in.

I did really enjoy these and even found myself progressing throughout the month. During my first few days, it would take me about 10 different L-sit attempts to reach 5 minutes — a few days it was more.

By the end, I could do it in about 6-7 attempts, with some lasting for over a minute. I also improved form, worked on my wrist strength, and my core feels stronger than it’s ever felt before (no pictures on this one).

This one was tough, I had to jump in to something I had only done a few times previously. The specific progression video linked, and several other resources, do not have someone doing this for so long (5 minutes) each day — more like 1-2 minutes. So it was tough to get this going and hold it, but a great workout of course. It also had some effect on my wrists, shoulders and neck — something I hadn’t considered in setting the goal (but something good to note going forward— in that it’s best to identify any potential consequences up front). 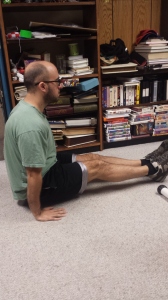 Another month and another 1/3 challenges completed (each time the Writing) and the others not fulfilled.

Now, there are a few ways to read into this trend. For one, writing has been a passion of mine for many years so it’s not surprising that these were completed — as I felt going in that they would be the easiest.

But I think the fall down here was that the non-accomplished goals this month (and 1/2 of last month) were all “daily” requirements. With my lifestyle being a bit mobile, it’s hard to always carve out time to do these things (especially as I spend a good amount of time staying at other people’s places…….and by good amount of time I mean all the time).

This coming month I’m going to change up the goals and not have a “daily” aspect to one of my goals (Health) and see how that works out. I’m curious if I’m just not at a point in my system where I can assure myself that something will get done each day — even something as small as a note in a gratitude journal app which is on my phone. That one hurts.

I’m still far away from developing a system. I now know that simple reminders don’t work. If I want them to, I need to remain committed, but I get so many of those (work or otherwise) that I tend to not give them their gravity. So that’s out as part of the framework. Attaching a habit onto another one worked well, but it was not longlasting. There were still plenty of days where I brushed my teeth or showered without journaling or L-sitting. But it’s certainly a possibility going forward.

Like February, March had a great deal of location instability. April will be the same. These are the hardest months. My day to day life cannot be consistent, and so if I choose to form a habit it will go against the grain of my lifestyle. This is difficult but it’s always a great learning experience. It’s in these times of difficulty we make our lasting discoveries. And so I move on.

April, the cruelest month, is ahead.