It’s my last day in Ecuador — on what’s been a 5 week journey through this little west-coast, eastern-time-zone country. I came to Ecuador with few expectations and even less planning. I had heard good things about Cuenca (which was right), Baños (which I never made it to), and the Galapagos of course (which will have to wait).

All in all, Ecuador turned out to be a blast — a great winter getaway that included solo time, friends, plane rides, bus rides, and a whole lot of dollar coins. Folks, this is where all of these went. It’s truly all you need to get by here.

I’ll break my journey into 5 parts, for each of the 5 towns I went through.

I started my trip alone. I hadn’t been alone in a long time — since my travels in the months previous had all been to see friends, familiar places, family, etc… I wrote a note to myself on day in Austin back in December that said, “I’ve gotten used to having my personal time in other people’s spaces.” It’s not something that comes easy, and when I talk about the un-perks of my lifestyle this is one.

But I came to Quito alone, posted up in a Airbnb near the city’s most famous park, and enjoyed some solace.

Each day, I’d take a walk around the city — sometimes in the heated sun, 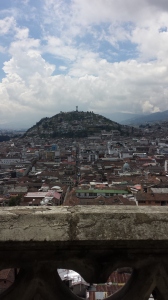 sometimes in the cooled darkness, and often getting a little bit of rain. I didn’t have anywhere to go — but found adventures along the way.

I checked out the Mariscal, Old Town, the Guayasamin Museum (which quickly climbed the ranks of favorite museums) and a ton of restaurants and coffee shops. And Parque La Carolina of course.

At the apartment, I’d cook dinner, work-out, meditate, read. The internet would come in and out and sometimes leave me alone reading my old writing and taking trips down memory lane. I got to write my review of 2014 and other posts — some of the projects I had put aside for months and months. It was good to be alone in a new place, with no obligations and no one to meet. Don’t think I can do it for too long, ever the extrovert, but it was a refreshing change for sure.

If Quito was an adventure into the self surrounded by the mountains and city,

Montañita was a return back into indulgence. This little “sleepy” hippie beach town really wakes up at night and thousands of backpackers gather on the street for drinks, music, and anything else. Literally, anything else. One mantra of the town, as told by the cab driver on the way in is that “anything goes”. Was lucky enough to be joined by two friends on this excursion, who made the most of out of their days whiled I worked, but we made sure to have a little fun at night.

If you’re a fan of beach towns, stepping out of the real world for a few days, and places where beautiful Argentinian girls are the majority, then this place might be just for you. I don’t know how anyone could make it there longer than a week though — the town, the sun, and everything else tend to wear you out a bit.

From our mansion up on the hill, it was les bon temps rouler in Montanita for sure — a foray back into the backpacker nightlife that I’ve been through in different places and continents by now. Good to see an old face, as always.

In Montañita, our Airbnb host happened to be a sort-of real estate mogul for the area (or as close to that as you can get). She was as committed to making sure we had a good time as any host I’ve ever had. After Montanita, I told her I was looking for some R&R and she really hooked it up.

Rocio, our host, brought me to a town called La Entrada — down two beaches away Montanita thought it might as well have been two countries away. La Entrada was truly a sleepy town, with no more than 50 people there and no cars allowed on its one street. The town was beach, a few houses, and a shack that sold fresh fish fry lunches for $2.

The other thing in town was a large mansion ON the water (over it) which belonged to my host. For most of the time, I was the only inhabitant of a 20-room house. And I spent the entire weekend in a hammock. It was the first place I’d ever been where the tide affected the wi-fi — the winds from the tide (3-5 feet from my hammock) messed with the signal too much to work.

From La Entrada, I got a ride with two folks I met to Guayaquil, Ecuador’s biggest city. There I met another friend who came down to work and travel in Ecuador. We stayed for three days in Guayaquil, mostly walking around our neighborhood, and checking out the boardwalk and old neighborhood (Las Peñas), before getting out of dodge (Guayaquil isn’t exactly a draw for anyone not from there).

There’s really not enough good things I can say about Cuenca. The city is old, but clean — Europe in the mountains of South America. It has ex-pats and locals seemingly living in harmony, and is a city dedicated to its own safety. All of this plus a huge coffee shop scene, great parks, and four rivers that rumble through it.

I was in Cuenca for about ten days. The days were sunny, open, and free. Work was busy but I made the most of the experience by getting out in the mornings,  coffee shopping in the afternoons and being lucky enough to stay at an Airbnb with a great cafe nearby. I also had a great weekend excursion to Cajas National Park that took a few wild turns along the way.

Cuenca ranked quite highly on the cities I’ve been to in the world. It certainly doesn’t have the size of some others, but its quaintness and ease of life are spectacular. Its churches, squares, parks make it a place of immense public beauty, and the price ain’t bad either!

Ambato was my last stop before heading back to Quito for a last few days before flying home. Ambato isn’t normally a destination for foreigners, that title usually belongs to the nearby Baños – but we were rolling through at Carnaval time and Ambato has the country’s biggest festival — The Festival of Flowers & Fruits. Both, I can assure you, were in full force. The event has a hoard of street vendors, parades with floats made out of…(guess), flower shops, and, unfortunately, little kids with foam cans spraying everyone.

I’ve had a recurring oddity happen to me over the last few months or so. I keep having flashes of memory, not wholly unlike deja vu, but I can tell it’s not a repetition, just a reminder. It’s nice, these flashes are all memories of travel and foreign places and times and doings, but the strange part is in I can’t place, for the life of me, where some of them happened. I see a flash of me standing outside an old mansion and I don’t know if it was in Indonesia or Argentina. San Diego or Prague. I put some effort into tearing the scene apart to recognize location-specific items, but my brain will not allow it. The world, it seems, has meshed itself into one indistinct place. I suppose that’s what I’ve always wanted.

Ecuador, you lovely little beauty, thanks for what you’ve given me. I wish I could give you the promise of eternal and distinct memory, but alas, soon you’ll become part of the whole — the nonspecific parts that make up my whole.

View all posts by ericryangrant