A lot of friends ask about book recommendations…..So I thought I’d publish a seres of posts with some commonly recommended reads.

If you’re looking for….

…a novel everyone should read?

John Steinbeck was one of the most prolific American novelists who ever lived. He may take the cake on that honor in the 20th century. And you may know him from either a summer reading requirement of Hatchet, a long history-based English course on The Grapes of Wrath or, more randomly, for his love of his dog Charlie. He also won the Nobel Prize and was a great letter writer.

East of Eden, in his own words, was the summation of everything he learned in the craft. And it shows. It’s brilliant. About as brilliant of a novel as I’ve read and every novel that I come to has this as its basis of comparison.

…short stories that would be perfect for my commute:

A Good Man Is Hard To Find (O’Connor)

Flannery O’Connor was a master. And I don’t use that term lightly. Anyone who has written a short story knows of the challenge of saying A LOT with only so many words. O’Connor mastered that and this is her pièce de résistance.

What might be considered the best collection of short stories published in 1) this century; 2) America; 3) by a female author — is well worth its high praise.

O’Connor takes you through the American South of the 40s ands 50s more than any other medium I’ve found — and she does so with a cast of interesting characters, outlaws and women. Not to mention a litany of lessons,  aphorisms (see title), and the kind of sentences that make writers want to put down their pens and weep.

Any newcomer to the short story would be wise to start here. Those experienced in that style should have already made their way here; and if they haven’t, there’s a dozen reasons here to check it out.

Try this line on for size: “She would have been a good woman if it had been somebody there to shoot her every minute of her life.”

…a change in my worldview:

Well, maybe not worldview. But it’ll certainly change how you view the education system in our modern world.

Gatto was a NYC teacher for something like 30 years and after leaving in what seems like an unceremonious fashion, he decided to start railing against a system that’s been much the same for the last 150 years. And the only big changes came about 100 years ago when the first wave of huge American industrialists put their hands in the system.

Why? Well, because they needed to know that 10 years from that point someone would come and work in their factories. That American workers would still be manageable and have the basic skills that they felt were necessary for the post-industrial revolution economy. They wanted an assembly line system IN education. And they got it.

Gatto breaks down that system and how it’s failing us in our current context. It’s almost a scary book in that right. Well worth the read.

Only knock: he slips a bit into the anecdotal a few times. You can list hundreds of people who quit school and “made it”. But you can also list those that got PhD’s doing much the same.

More recommendations to come. Enjoy the first round here! 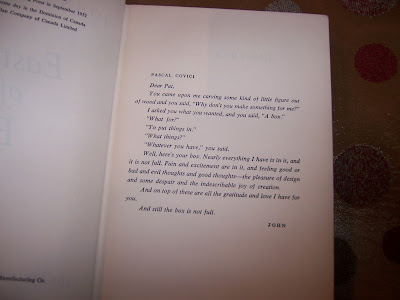 Dear Pat,
You came upon me carving some kind of little figure out of wood and you said, “Why don’t you make something for me?”
I asked you what you wanted, and you said, “A box.”
“What for?”
“To put things in.”
“What kind of things?”
“Whatever you have,” you said.
Well, here’s your box. Nearly everything I have is in it, and it is not full. Pain and excitement are in it, and feeling good or bad and evil thoughts and good thoughts- the pleasure of design and some despair and the indescribable joy of creation.
And on top of these are all the gratitude and love I have for you.
And still the box is not full.

“I’ve seen a look in dogs’ eyes, a quickly vanishing look of amazed contempt, and I am convinced that basically dogs think humans are nuts.” – John Steinbeck

While you’re here, why not check out some more!

Lastly, check out my book — The 9 to 5 Nomad: A Modern Guide For The Location-Independent Employee (full website)