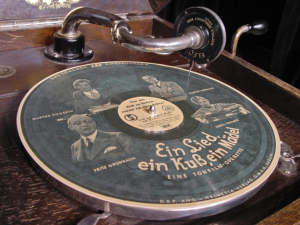 A long time ago I made a very simple decision. When I burned a new mix CD (yes, we did that)—almost always to play in my car to idle and drive around aimlessly—I took a sharpie and added the date on the front of the burn date.

Simple. A timestamp before a timestamp was thrown on everything.

At the time, I think it was simply a way to recognize which were new(er) CDs and which were older. Now, however, these have become my own personal archeology and I’m so thankful to my former self(ves) for doing this.

What it’s allowed for is a perfect nostalgia—giving me the opportunity to listen as I listened years before. The same songs still play out of that disc, though all else has changed.

Lately, I’ve been wishing I wrote a journal growing up. Some of this is due to trying to attach feelings retroactively to events in my life (birthdays, breakups, big decisions, etc…)—though part of it is just to better form a timeline of my growing into who I am today.

Lately, the lack of those answers AND the knowledge that this person too should fade into the background has made me sad. Fleeting, this all is—even you, even me.

This kind of scattered, wanting nostalgia has become all the more prevalent as I’ve moved back to my hometown of Chicago and find myself driving streets I once drove a decade ago. I drive past the Aragon where I used to go to shows. See the skyline sitting prominently as its backdropped self. Big shoulders. Old shoulders. The shoulders I’ve known.

What do to with the memories as they rush back? Where to place them if not to know the person to who they originally belonged? I think this is the platform of nostalgia—we cannot know these past people, but we can know their experiences. And they can rush back with a richness once unlocked by something.

I think of Odyssesus. It took him 10 years to get back to Ithaca. It took me 9 to come back here.

Is this to be my kingdom? And am I to rest, contented in this lifestyle and learned from the past.

Or do I take our hero as Tennyson wrote him, yearning to move:

Yet all experience is an arch wherethro’

For ever and forever when I move.

These feelings collided recently when flipping through some old CDs on my way to work I came across the disc pictured here. It’s date—11/6/08—was exactly 7 years prior to picking it up.

For no other reason than the alignment of dates, I was struck. I brain-stepped into a kind of corny nostalgia I swore I’d never put myself into.

There are easy things to glean from the track list (in full at the bottom). Clearly I was as into singer/songwriters as ever—25 of the 36 tracks are by artists of [First Name] [Last Name] nomenclature. A few artists pop up three times (Springsteen, Dylan, Morrison), but none more than that.

Others take a second of investigation. Young Jeezy? Ahh, yes. November 6th, 2015 would have been just two days after the 2008 election. I don’t have much memory of the days following election day, but I’ll always remember that night—watching the results come in, going to the Plaza after Obama won and drinking to what felt, then, like a new world.

What else do I know? In late 2008, I was working at Epic in Verona, WI—part-time outside of school to make some extra money. The job involved a 30-minute drive out to the suburbs of Madison. An hour each way is probably good enough reason to make not one, but two CDs.

The rest? I don’t know. I probably will never know. But I can start to construct at least some memory—of me listening to these CDs while driving in Madison on my way to&from Epic—and know that new memories will be made as I listen to/from the suburbs or my job at Uber or elsewhere. It’s never just one thing. We’re blessed with multitudes constantly in the millions—and that makes it tough to hold on to anything, really.

The larger question here is what to make of this nostalgia? Is it useful? Worthwhile? Damaging?

As a traveler, part of me says to pick up & move on. Baggage is a burden; weight a hindrance. If we’re stuck somewhere in the past, how do we enjoy the present?

But lately, part of me wants to squeeze these moments. These precious construction bits of who I am today. Understandings of what laid the road to now (in hopes of being evermore present). The affluence of nostalgia provides knowledge and color to our lives. It brings stories and failures; forgotten hopes and stillwater dreams. I look back on the last 7 years and there are moments of immense, unrepeatable joy.

I think about racing to write them all down. To revisit them later as a laundry list of accomplishment. But that’s not the right move. That doesn’t seem like it, anyway.

What is right? I don’t know.

One right move seems to be to smile at our own pasts, the heavy and the light, the suns and moons that have come before. They’ve landed us here and blanketed us with experience.

But nostalgia is not a one-sided thing. There are aches that feel wrong to smile at.

Perhaps, then, the affluence is also a complication. And someday we’ll get to decide how we’ll look back not just on our experiences but also on said nostalgia itself.

Life was once simple, I think. It must have been.